As eligibility for the Covid-19 vaccine expands to all Americans and the country moves towards a full re-opening, durably returning to normal life depends on vaccine uptake. The U.S. developed and produced vaccines at record speed and, initially, the rate of daily administered doses rose sharply from January to April 2021. Since May 2021, however, the pace of rollout has declined and many remain unvaccinated.

Service sector workers are at the center of commercial life and staffed the front lines during the worst days of the Covid-19 pandemic. Understanding the barriers holding service workers back from accessing vaccines now is crucial for ensuring their protection and for securing a national recovery from the Covid-19 pandemic.

The Shift Project surveyed workers from March 2021- May 2021 at large firms in the service sector, including in grocery, retail, food service, pharmacy, and delivery, asking a range of questions about Covid-19 vaccination and what incentives their employers had provided. (See methodological appendix for more details.) Nearly 9,000 workers reported on their vaccine status, sentiments, and barriers.

We find that half of frontline, service sector workers reported being unvaccinated as of early June 2021. Without the ability to take paid time off to get the vaccine or recover from side effects, workers struggle to make vaccination work. We find vaccination rates increase when employers support and facilitate access to Covid-19 vaccination. Workers with access to paid sick leave, for example, were much more likely to be vaccinated. Reducing the many barriers to vaccination is especially important for service workers who suffer from low and volatile incomes, lack of access to paid sick leave, job insecurity, and unstable schedules that make it harder to access needed health services.

Figure 1. Monthly Share of Workers who Received at Least One Dose 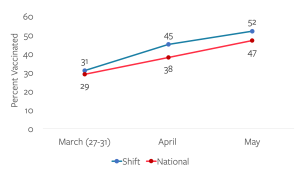 Disparities in Vaccinations by Geography and Demographics

Vaccination rates of service sector workers varied by race, gender, age, and region. Among racial and ethnic groups, Asian American and Pacific Islanders stood out with the highest vaccination rates at over 60%. White (47%), Hispanic (46%), and Black (42%) groups were in the middle and American Indian Alaskan Native and other race/ethnic groups at the low end, with vaccination rates below 30%, consistent with findings from a recent study from Kaiser Family Foundation.

Previous Shift research found that Black workers are more likely to face more unstable schedules. Unstable schedules can make it more difficult for workers to take time off when needed and can increase workers’ fears of retaliation or lost pay from taking time off. These concerns may present greater barriers to vaccination for Black workers.

Women were less likely to be vaccinated than men and were more likely to report concerns about side effects compared with men. Our finding differs from studies on the overall U.S. population that find that women have higher vaccination rates than men. Women in our sample are hourly-service workers, a unique subset of the population that tend to be lower income and have fewer resources for childcare than the average woman in a broad national sample. Additionally, women in our sample were less likely to have access to paid sick leave than men, making taking time off for potential side effects of vaccination riskier. Thus, women in the service sector who struggle to get paid sick leave, find time off, or get affordable childcare may have heightened challenges to getting vaccinated.

As in the general population, we find substantial variation in vaccination rates by age. Just 38% of workers ages 18-19 reported receiving at least one dose, compared to 72% of workers over 70. This is not surprising given older groups face a much higher risk of serious illness from Covid and were the first prioritized for the vaccine.

Consistent with prior research, we also find a great deal of geographic variation in vaccination rates. Workers in Southern states had a vaccination rate of 41% while 55% of workers in the Northeast and 47% in the West were vaccinated. This geographic variation is likely due to a combination of state politics and health care access challenges in Southern states.

Perhaps surprisingly, customer contact was not associated with vaccination rate. Customer contact was nearly universal among our sample – 90% of respondents stated they interact regularly with customers. While many states have taken tremendous effort to prioritize the most vulnerable individuals first for vaccination, still service sector workers who are exposed to customers are just as likely to be unvaccinated as those who are not.

Figure 2. Variation in Vaccination by Demographics and Geography 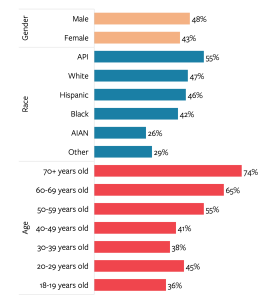 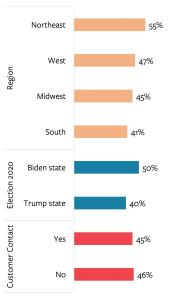 Reasons Why Workers Were Not Vaccinated

Even as vaccination rates rose swiftly in the Spring of 2021, about half (55%) of the service sector workers in our sample were unvaccinated at the time they were surveyed. Most (78%) of these unvaccinated workers had not tried to make an appointment, largely due to concerns about the vaccine’s side effects. Many of those who did not try to make an appointment expressed a lack of concern about the risk of Covid. Others did not believe they were eligible or had time conflicts getting in the way of trying to schedule a vaccination appointment.

Among the unvaccinated workers who did try to make an appointment, around half were not able to. This was primarily due to ineligibility or unavailable appointments. Most service sector workers became eligible by mid-March as part of the second wave after healthcare workers, but some still struggled to find appointments. 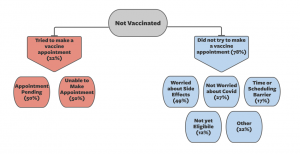 *The question “why did you not try to make a vaccine appointment?” allowed respondents to select multiple answers, producing a sum that totals to more than 100%.

Front-line workers took on enormous risks during the Covid-19 pandemic, even as employers recorded record profits. The Covid-19 vaccine represents an opportunity for these same workers to achieve a degree of safety on the job. Some employers took steps to encourage and facilitate vaccinations for their workers. Companies like Trader Joes and Kroger offered small bonuses to workers who got vaccinated. Other companies like McDonald’s, Olive Garden, and Aldi offered paid time off to get the vaccine.

These examples highlight the supports that some employers provided. The Shift data show that such measures were far from universal and that many workers did not receive any supports from their employers for vaccination.

Only 41% of respondents in our sample said their employer implemented some type of vaccination incentive or support such as getting the vaccine at work (19%), getting paid time off (PTO) to get the vaccine (13%), getting bonuses to be vaccinated (12%), or being offered paid sick leave (PSL) if they had side effects (8%).

But, when provided, these employer supports made a huge difference. Workers who were offered incentives are more likely to have been vaccinated. At companies that provided the vaccine, nearly 70% of workers were vaccinated. Even short of providing the vaccine, employer policies that provided for paid time off for vaccination or in the event of side effects made a big difference. But, when employers provided no support toward getting the vaccine, only 39% of workers were vaccinated. These finding suggest that employer supports and incentives can translate into a marked increase in workers’ vaccination rates. 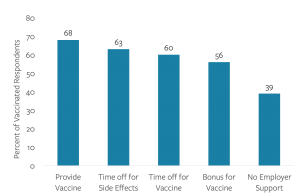 A year into the pandemic, paid sick leave remains far from universal among front-line service sector workers. We find that just over half (54%) of workers in our sample have access to paid sick leave. Such paid leave is essential when workers are ill and need to stay home to recover or need to care for a family member. Paid time off can also play a vital role in facilitating access to the Covid-19 vaccines.

We find that the predicted vaccine uptake (reporting having received at least one shot) is 8 percentage points higher for those with paid sick leave available. Of note, this difference is most clearly evident in the more recent data. In May, those with paid sick leave were 15% more likely to have gotten the vaccine. As more workers became able to get the vaccine and as the workers who were most at risk or most motivated to get vaccinated have already received their shots, having paid sick leave appears to become increasingly important in a workers’ decision on whether or not to get vaccinated. 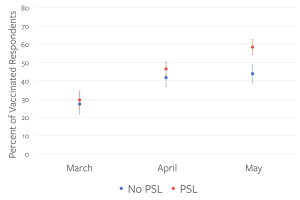 Frontline service sector workers face some of the highest risk of Covid-19 exposure, but they still lag behind other essential workers in vaccination rates. Protecting the individuals that serve food, bag groceries, staff hotels, deliver packages, and assist shoppers is essential not only for reducing their risks of exposure, but also for protecting the health of the communities we live and work in.

Vaccination rates also vary by demographic traits. Individuals who work in Southern states were less likely to be vaccinated than workers in the Northeast and West, likely due in part to challenges of health care access. There were also substantial differences in vaccine rates by age, with older workers being much more likely to have received at least one dose of a Covid vaccine. Older individuals were the first group to become eligible and they face the highest risk of serious symptoms of Covid.

Among workers who had not yet been vaccinated, the vast majority (78%) had not attempted to make an appointment. When we asked why, most answered that they were afraid of the vaccine’s side effects. 64% of vaccine hesitant workers in our sample (those who indicated fears or concerns about the vaccine) said they feared the side effects of the vaccine. This finding is consistent with the recent literature that suggests Covid-19 vaccine hesitancy is largely related to fear of the side effects, rather than a concern about the vaccine’s effectiveness.

The unknown side effects of the vaccine can mean more than discomfort, but also lost work days and lost wages. For service workers without access to paid sick leave, the side effects can be another barrier to vaccination. Our finding that workers without access to paid sick leave are less likely to be vaccinated adds evidence that fears of missing work and losing pay may contribute to lower vaccination rates among service workers.

Some companies have gone further by implementing policies to directly encourage vaccination among their employees. Workers at companies that offered supports or incentives, especially providing the vaccine at work and offering additional paid sick leave for side effects, had higher rates of vaccination than their counterparts at companies lacking these provisions. Voluntary employer action effectively increases vaccination rates, but half of workers reported that their employers offered no supports or incentives to receive the vaccine.

A larger coordinated effort is needed to ensure all frontline service workers have access to vaccination. Increasing access to vaccines is especially important as states begin to lift mask restrictions indoors. While federal policies such as the Federal Families First Coronavirus Response Act have increased access to paid sick leave in response to Covid-19, most large, service sector employers were exempted and the mandate has already expired. Along with voluntary employer action, universal federal policies – such as paid time off to encourage vaccinations – have the potential to protect some of the country’s most vulnerable workers and the public’s health.

The authors gratefully acknowledge the work of Elaine Zundl and Connor Williams in the preparation of this report.