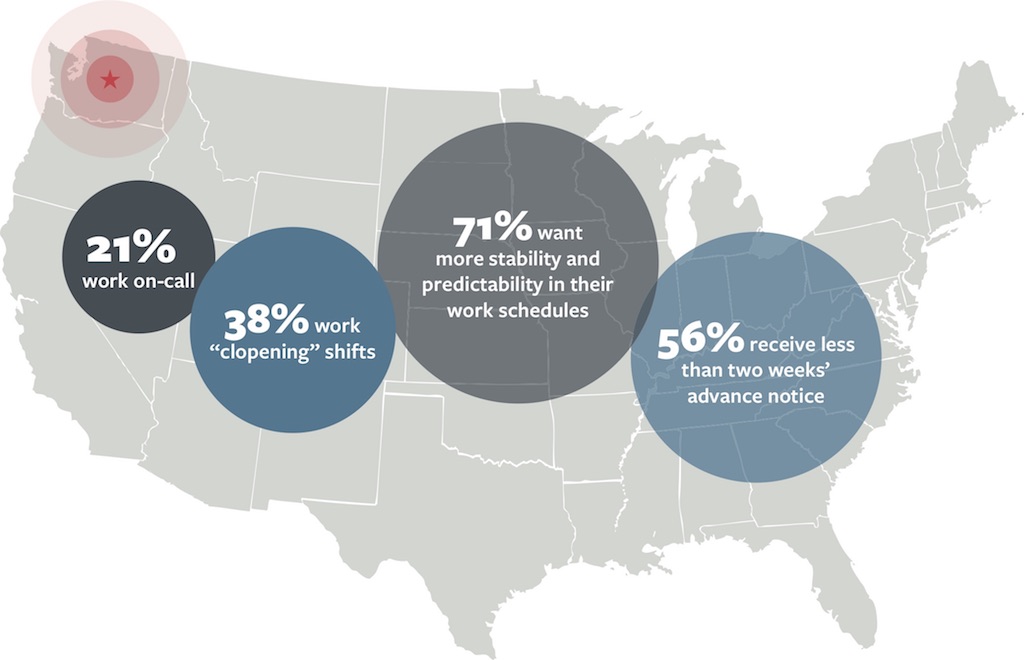 Service sector jobs in the United States are characterized by low pay, few fringe benefits, and limited employee control over scheduled work days and times.1 Many service sector employers across the country rely on just-in-time and on-call scheduling practices designed to minimize labor costs by closely aligning staffing with consumer demand.2 These practices can introduce significant instability into the lives of workers and their families.3

This research brief is part of a series designed to advance our understanding of working conditions in the service sector – in particular, schedule instability and unpredictability – in cities and states across the country. Since 2016, The Shift Project has collected survey data from workers employed at large chain retailers and food service establishments.4 We ask respondents about their work schedules, household economic security, health, and wellbeing, targeting employees at large firms that are the focus of recent state and local labor regulation efforts. Our data permit an unprecedented view of labor conditions in the service sector and provide unparalleled insight into the work and family lives of low-wage workers.

Over 475,000 people are employed in the retail and food service sectors in the state of Washington.5 This brief describes the experiences reported by 3,847 of these workers. We exclude data from the city of Seattle, which implemented scheduling regulations in 2017, in order to capture the experiences and working conditions of Washingtonians who are not currently covered by secure scheduling laws.6

In Washington, the minimum wage is currently $11.50 – substantially higher than the $7.25 federal minimum wage – and the estimated hourly living wage for a single individual with no children is around $12.00.7 Yet, nearly half of Washington service sector workers in our sample (which covers the 2016-2018 period) report earning less than $12.00 per hour. Futhermore, the living wage estimate provided here assumes year-round full-time employment, an assumption that applies to a minority of Washington service sector workers. In fact, only a third of Washington workers report usually working at least 40 hours per week. The rest usually work part-time: 37% report working between 30 and less than 40 hours per week, 22% usually work between 20 and less than 30 hours, and 8% work fewer than 20 hours per week.

In addition to widespread part-time scheduling, we also find that Washington workers experience unstable and unpredictable work schedules, which manifest along several dimensions.

Nearly three-quarters of the workers in our sample report work schedules that are irregular or nonstandard: 34% report “variable” schedules, 17% report “rotating” schedules, and another 16% report regularly working night or evening shifts. Only 28% of service sector workers report a regular daytime work schedule.

Washington workers also experience a great deal of variation in the total number of hours worked each week. When asked about their work schedule over the past month, the average worker reported a difference of 11 hours between the week they worked the most hours and the week they worked the fewest hours. In percentage terms, that is a 31% gap between the hours worked in the week with the most hours and that with the fewest. Given our focus on workers who are paid hourly, we know these variations in hours lead to volatility in earnings.

These measures show that many Washington service sector workers experience unstable and unpredictable work schedules. We also find that these workers often do not have control over their schedules. Half of workers have no input when it comes to setting their work schedules, 34% have some input, and only 16% of workers have a large degree of control over their scheduled work days and times.

Compounding all of these dimensions of scheduling instability, most workers reported that even in their personal time, they have to keep their schedule open and available for work. A striking 68% of workers reported that they keep their schedule open and make themselves available even when they are not scheduled to work. This has implications for their ability to balance work and family responsibilities, to combine work with schooling or other pursuits, and to achieve a work-life balance.

What do workers want? There is an unmet desire for more schedule stability and predictability among a large majority of Washington workers. When asked their preference, 71% of workers said that they “would like to have a more stable and predictable work schedule.” This share was even higher among Washington workers who reported a variable schedule (85% of those workers) or workers who reported working on-call shifts in the prior month (84% of those workers).

Another consequence of unstable work hours is unstable earnings and accompanying financial challenges. Thirty-eight percent of workers report that their income changes from week to week, and 22% report that they have difficulty paying their bills.

The Relationship Between Work Schedules and Worker Health and Hardship

The portrait of Washington service sector workers reveals that unstable and unpredictable schedules are commonplace. As we have seen nationally, the retail and food sectors in Washington are characterized by low pay, insufficient work hours, and a lack of control over scheduled work hours. With the Shift data, we can also see in detail how these workers also contend with schedules that are announced with little notice and that are often changed at the last minute. By hearing directly from workers, we can learn not only about their experiences, but about their preferences. The majority of workers express a desire for more work hours and more predictability in their work schedules.

Scheduling practices are beginning to change, however, as some localities have passed labor laws that regulate work schedules. The state of Oregon, New York City, Seattle, San Francisco, and Emeryville (CA) have all passed legislation or implemented regulations requiring a certain amount of advance notice of work schedules (usually two weeks) and stipulating that workers be compensated by employers when their shifts are changed on shorter notice. Many of these new labor regulations also include an “access to hours” provision, requiring that employers offer additional hours to their part-time workers before hiring additional part-time employees.

There is currently no law in the state of Washington that explicitly regulates scheduling practices for hourly service sector workers employed outside of Seattle city limits. In this context, our data reveal that scheduling practices such as short advance notice and last-minute scheduling changes are a common experience for Washington workers. We document workers’ desire for more stable schedules, and find strong relationships between unstable schedules and undesirable outcomes such as hunger and poor sleep quality. 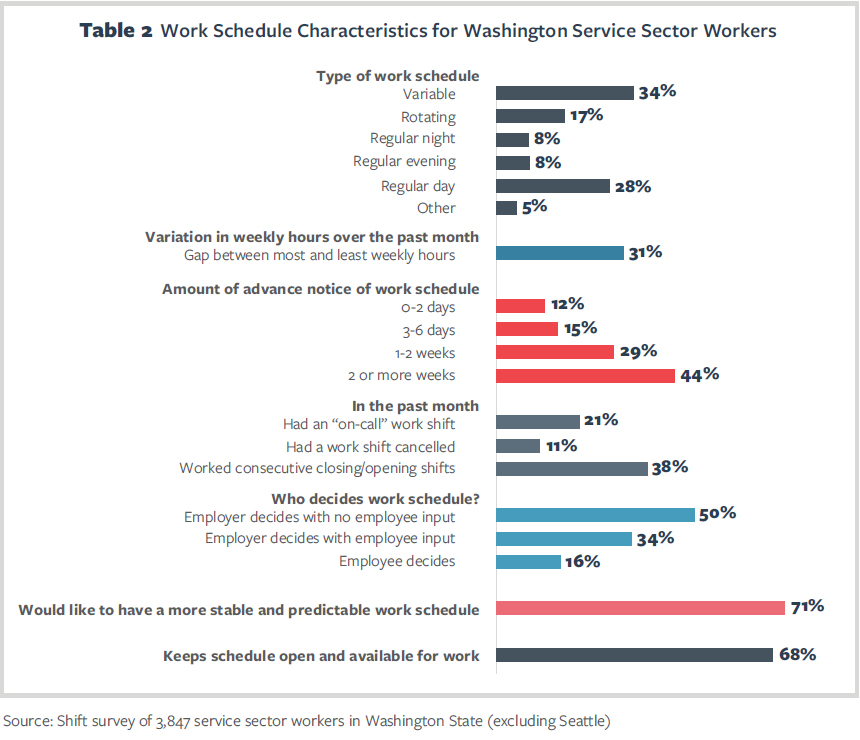