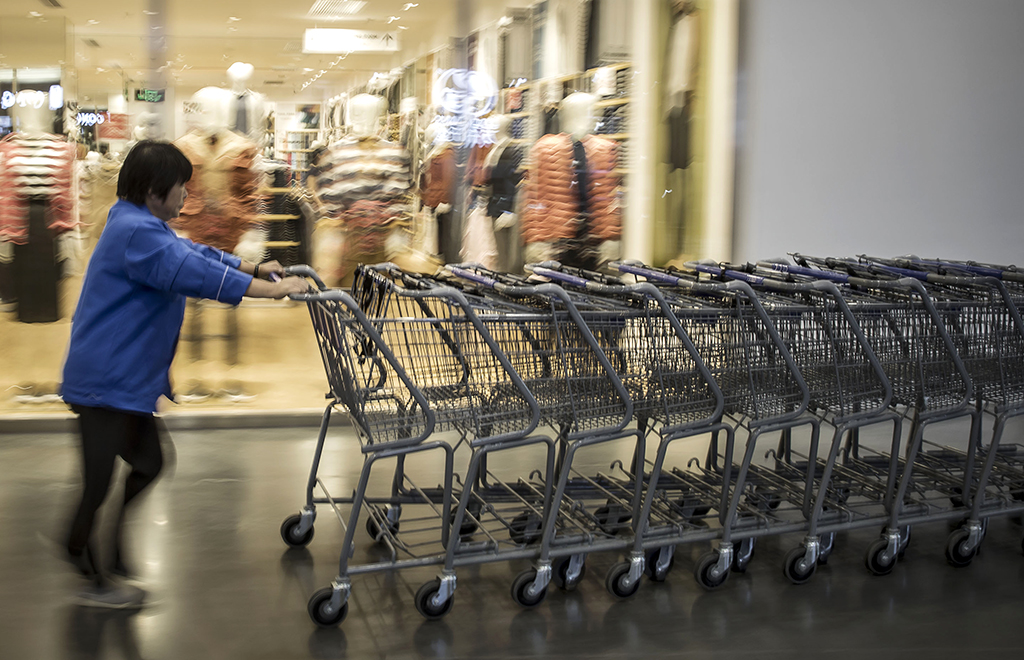 The American labor market is increasingly unequal, with ever greater returns at the top of the market and growing insecurity for workers at the bottom. Much has been written about the economic face of rising precarity for low-wage workers, but this transformation has also involved a shift in the temporal dimension of work. Frontline service sector jobs are characterized, not only by stagnant wages and few fringe benefits, but by a lack of employee control over scheduled work days and times in the context of substantial schedule instability.1

Many service sector employers across the country rely on just-in-time and on-call scheduling practices designed to minimize labor costs by closely aligning staffing with consumer demand.2 These practices, along with related economic insecurity, can introduce far-reaching instability into the lives of workers and their families.3 A lack of data has limited our ability to understand the implications of just-in-time scheduling and routine work schedule instability for workers’ health and wellbeing. However, newly available data from The Shift Project allow us to fill this gap.

Since 2016, The Shift Project has collected survey data from workers employed in food service and retail at large chain stores – firms that are the focus of recent labor regulation efforts in select cities and states around the country.4 We ask these workers about their work schedules, household economic security, health, and wellbeing.

The Shift Project collects data using an ongoing national survey of service sector workers. The research presented here draws on data from 27,792 workers who completed surveys between June 2016 and October 2017. All of these respondents were hourly workers employed at one of 80 of the largest (by revenue) food service and retail companies in the United States. In our paper, we tabulate these surveys to describe the prevalence of unstable and unpredictable work schedules among service sector workers (these findings are summarized in Table 1, and some examples are highlighted below). The overall portrait of work in the service sector reveals that unstable and unpredictable work schedules are commonplace.

The Relationship Between Work Schedules and Worker Health and Wellbeing

We next consider the relationship between work schedules and worker health and wellbeing using three measures: workers’ psychological distress, sleep quality, and happiness.5

Routine uncertainty about when and how much an individual will work from day to day and week to week could lead to feelings of distress. Indeed, we find such a relationship in The Shift Project’s survey data.

Half of service sector workers in our sample report at least a moderate amount of psychological distress. Distress is measured using a scale that combines reports of feeling depressed, nervous, restless, hopeless, that everything is an effort, and that difficulties are piling high. The 54% of workers we categorize as moderately distressed reported that they experienced these specific markers of distress, on average, somewhere between “a little of the time” and “some of the time.” Notably, we find that workers who experience unstable and unpredictable scheduling are more distressed, on average. Workers who are exposed to multiple forms of unstable and unpredictable scheduling are the most distressed.

We also look at the relationship between exposure to particular scheduling practices and worker distress. We see that variation in the total number of hours worked from week to week is associated with psychological distress, as is working a variable or rotating schedule compared to working a regular day shift.

Short notice and lack of control is also distressing. Workers who receive less than one week’s advance notice of their work schedules are more distressed than those with two or more weeks’ notice, and workers exposed to cancelled shifts, on-call shifts, and clopening shifts are significantly more likely to experience psychological distress. For example, 64% of workers who have had shifts cancelled report psychological distress, compared with less than half of those who have not (see Figure 1). 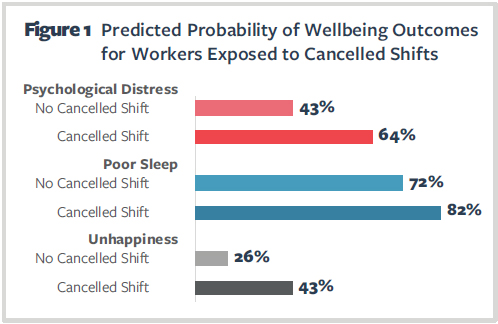 Unstable work schedules may also affect health by interfering with workers’ quality of sleep. An irregular and unpredictable schedule could make it difficult to maintain routines, such as regular times for sleep and waking.

In fact, we see evidence of a negative relationship between schedule uncertainty and sleep quality: while three-quarters of the workers in our sample report fair or poor sleep quality, workers with unpredictable schedules report worse sleep quality than those who are not exposed to unpredictable scheduling practices. Furthermore, we find that overall exposure to multiple forms of instability raises the risk of fair or poor sleep, particularly among the nearly half of all workers who report exposure to three or more such practices.

Workers who experience greater hour variation also experience worse sleep quality than those whose hours vary less or not at all, as do those who work variable schedules as opposed to regular day shifts, and those who receive less advance notice of their work schedules.

Unstable work schedules may also affect quality of life and workers’ reports of their subjective wellbeing. To test this possibility, we compared reports of happiness from workers with more and less stable schedules.

More than a quarter of workers in our sample report feeling “not too happy” (as opposed to “very happy” or “pretty happy”), and workers in our sample who report experiencing unstable and unpredictable schedules are more likely to report greater unhappiness. We see that greater exposure to multiple unstable scheduling practices also increases workers’ probability of feeling unhappy.

Respondents who work a variable schedule are less likely to report being “very” or “pretty happy” compared to those who work a regular day shift, and those with less than one week’s advance notice are significantly less happy than those with at least one week’s advance notice. There are also strong relationships between happiness and exposure to cancelled shifts, on-call shifts, clopening, and limited schedule control. For example, Figure 1 shows that workers who experienced a cancelled shift in the past month were much more unhappy overall (43%) compared to workers who did not have a shift cancelled (26%).

Our analysis of schedule instability and workers’ psychological distress, sleep quality, and happiness points to the human toll of unstable and unpredictable work scheduling in service sector jobs. To put these associations into a broader context, we can compare the relationship between work schedules and worker health with that of hourly wages and health.

In our paper, we use the Shift data to simulate how health and wellbeing outcomes may change in response to work scheduling laws or minimum wage increases. We compare these two labor regulation mechanisms in a series of policy-relevant scenarios, evaluating the impact of several common components of secure scheduling laws that have been implemented in recent years, such as increasing advance notice from 0-2 days to 3-6 days, one week, or two weeks (as mandated in New York City, Oregon, and Seattle and San Francisco, respectively); banning on-call shifts (as mandated for retail workers in New York City); or eliminating clopening shifts (as mandated in Oregon, Seattle, and in New York City’s fast-food industry).

We then contrast these scenarios with increases to the federal minimum wage of $7.25, based on actual state and local increases that occurred between 2015 and 2018. We find that, while both wage increases and more stable schedules are associated with improvements in psychological distress, sleep quality, and happiness, there is a stronger association in the case of scheduling.

Figure 2 compares the magnitude of the relationship between schedule instability and health outcomes with that of wages and health. For all three outcomes – distress, sleep, and happiness – the associations with schedules are much stronger than those with wages.

The majority of research has focused on the economic dimension of precarious work – specifically, on wages. In this context, it is striking that exposure to unstable and unpredictable work schedules has substantively larger negative associations with distress, sleep, and happiness than do wages. 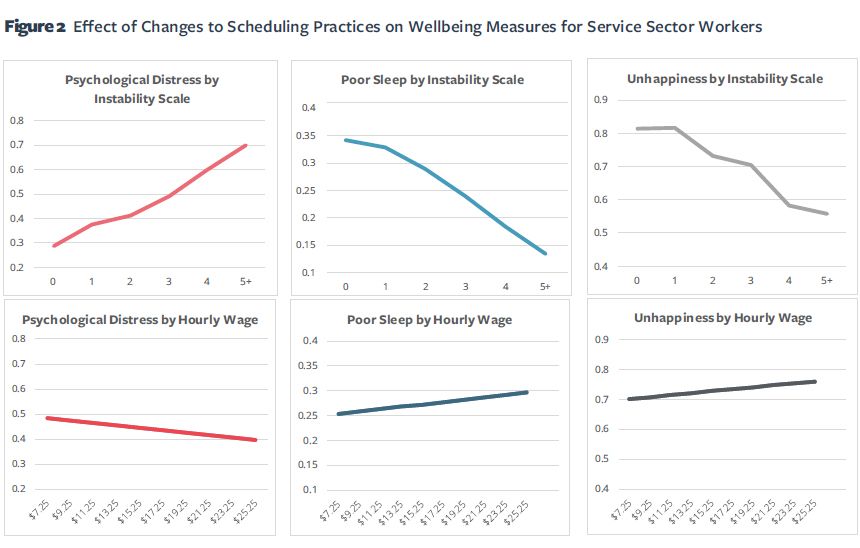 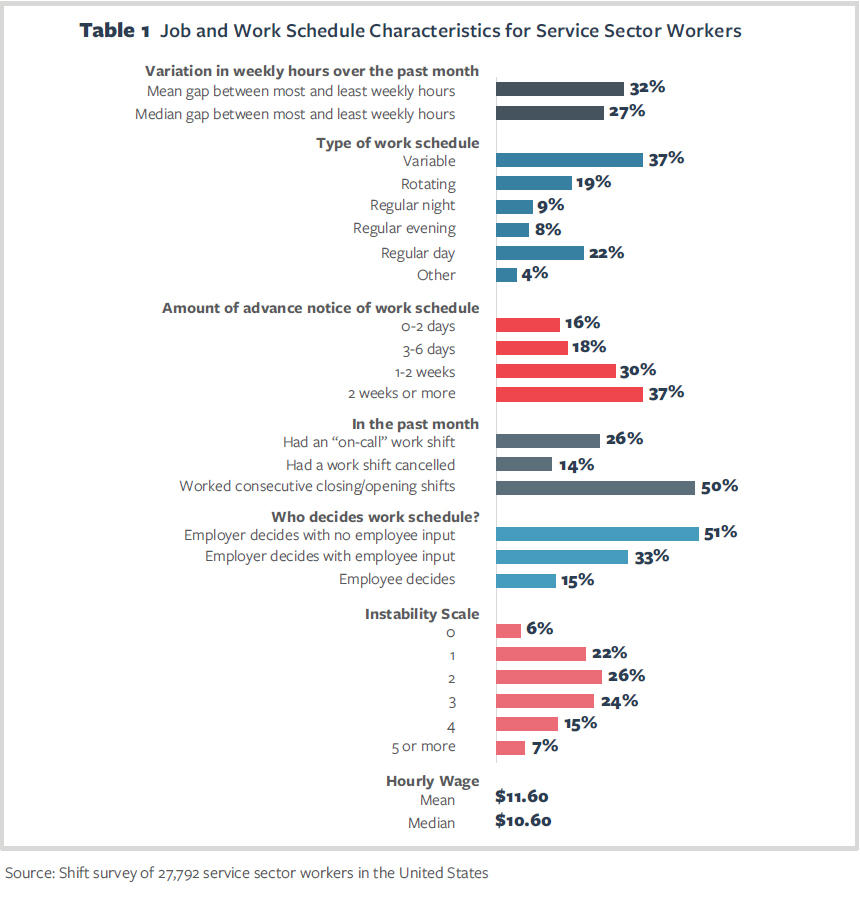 3 Lambert, S.J., P. Fugiel, and J. R. Henly. 2014. Precarious Work Schedules among Early-Career Employees in the US: A National Snapshot. University of Chicago.

4 Further details about our data collection and methodology are presented in an Appendix at the end of this brief.

5 The presented findings are based on “regression analysis,” a widely-used analytic technique in the social sciences, which is designed to isolate the effects of unpredictable work schedules while holding constant other influences. In this case, the reported relationships between having an unpredictable work schedule and health and hardship outcomes are “net of” statistical controls for worker age, race, gender, educational attainment, marital status, school enrollment, children in household, hourly wage, household income, average weekly work hours, employment tenure, managerial status, as well as year and month fixed effects.

6 In our analysis of the relative associations between job characteristics and worker wellbeing, we use estimates of changes in predicted values of psychological distress, sleep quality, and happiness from a policy-relevant change in scheduling or wages. All models include controls for race, age, gender, educational attainment, marital status, school enrollment, hourly wage, average weekly work hours, employment tenure, managerial status, and living with children as well as month and year fixed effects.